If you wanted to know the local lowdown in Hastings during the mid 1800s, then the Gossiping Photographer was your man.
Francis Frith published his book The Gossiping Photographer at Hastings in 1864, which he both authored and illustrated with his own photographs.
The titlepage of the book features several images, including crinoline-clad ladies sitting on the beach at Hastings in front of boats and bathing machines, and portraits of Frith taking a photograph and writing at his desk, overlaid with the book’s title, as well as the Frith imprint. 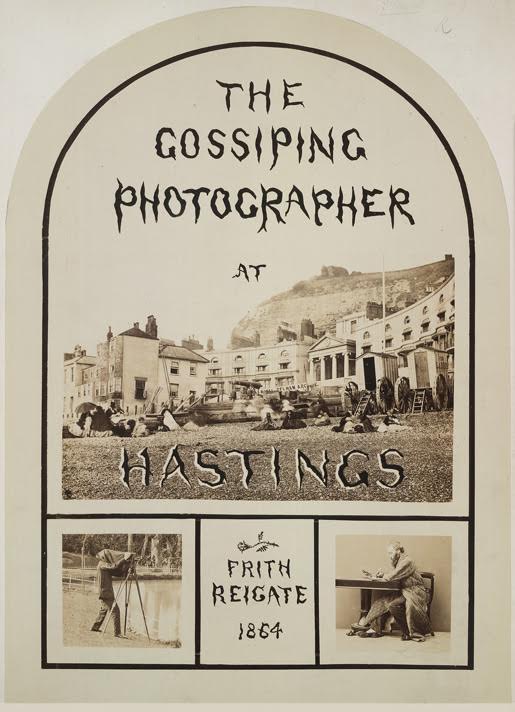 The book, a copy of which is now available in the British Library, includes 16 photographic views of Hastings, St Leonards, Rye and Winchelsea.
The text which accompanies the photographs, titled ‘Gossip About Hastings’, is a gently satirical discussion of century English seaside resort and its sister towns in a travelogue style.
Frith was a pioneer in the field of travel photographer, having begun his career with three trips to Egypt and the Holy Land between 1856 and 1860.
While travelling, Frith took photographs of monuments, which were exhibited to great acclaim and issued in albums produced by Frith & Co, the firm he founded in 1859 in Reigate in Surrey. Like his work in The Gossiping Photographer of Hastings, Frith also wrote the letterpress commentaries accompanying his photographs in his first album, ‘Egypt and Palestine Photographed and Described’.
Along with albums and publications such as The Gossiping Photographer of Hastings, Frith’s company also published prints, albums and postcards of views throughout Britain, which sold to an eager tourist market. Frith & Co became the largest firm of its kind in century, and ran as a family business until 1971.