[This story was published on April 7 on the BAVS Neo-Victorian blog. Read the original story at victorianist.wordpress.com/2017/04/07/neo-victorian-review-lizzie-borden-took-an-axe-see-what-i-have-done-by-sarah-schmidt-spoilers.]

Lizzie Borden took an axe, and gave her mother forty whacks
When she saw what she had done, she gave her father forty-one

History remembers August 4, 1892 as the date that the mutilated bodies of Andrew and Abby Borden were discovered in their family home in Fall River, Massachusetts.

This infamous event led to the arrest and subsequent acquittal of 32 year old Lizzie, Andrew’s daughter and Abby’s step-daughter.

Sarah Schmidt’s retelling of the notorious cold case murders in her debut novel See What I Have Done is superbly poetic in places, and is utterly engrossing as a novel.

Despite the crime having been committed 125 years ago, the author cultivates an uncertainty in the mind of the reader by encouraging the audience to consider what we know of the historical case against Schmidt’s recreation of the story.

There is a deliberate dissonance, as exemplified by the scene in which Lizzie is informed of the discovery of Mrs Borden’s body. ‘The officer stared blank, then looked toward the ceiling where Mrs Borden was lying face first in a swelling pool of dark red, her arms by her side, her feet crumpled in her soft leather boots. Her hair, plaited then rolled tightly around the crown of her head, hacked off and tossed aside onto the bed. What a horrid thing.’ (89)

Is Lizzie imagining her stepmother’s dead body… or remembering it?

Alongside her fictional additions to the historical narrative, Schmidt compounds the novel’s sense of confusion by illustrating the police’s search for answers, by placing small clues in the reader’s path, and by repeatedly demonstrating Lizzie’s inability to tell the truth – either to the police, to the reader, or to herself. ‘Do you want to know my secret?’, she asks. ‘I’ve remembered something about that day.’ (311)

This reflects the fact that the real Lizzie’s inquest testimonies were deemed inconsistent, possibly due to the fact that she was prescribed morphine after the murders were discovered in order to help calm her nerves.

In an interview with the Booktopia Podcast,Schmidt explained that she struggled with Lizzie as a narrator due to her notorious unreliability. 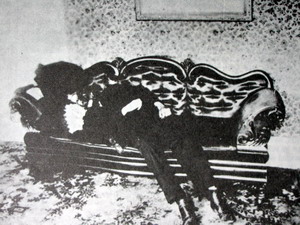 ‘Lizzie is never going to give us a straight story’, Schmidt said. ‘But was there somebody else?’

In Schmidt’s retelling of the story, there are several people whose experiences can help to explain what led to the events of that fateful day.

Told in multiple voices, See What I Have Done explores the events of August 4, 1892 at the Borden’s Fall River home through the eyes of several key players.

That Sarah Schmidt has chosen to reconfigure the third line of the infamous children’s rhyme as ‘See What I Have Done’ for her novel’s title is a deliberately portentous choice on the part of the author, given the novel’s prioritising of psychological insight.

‘I was in a second hand bookstore, and I was looking for something to read and write about,’ said Schmidt, discussing on the Booktopia Podcast how she came to write the novel.

‘A pamphlet fell off of the shelf and onto the floor, and I picked it up. It was about the Lizzie Borden case, and I kind of flicked through it. It was really ratty and yellowed, and when I got to the end of it, I thought – boring! So then I put it back on the shelf, went home and thought nothing more of her – until I went to bed that night. I had a dream, and at the end of my bed, Lizzie was there. She was poking my leg and saying “I have something to tell you about my father, he has a lot to answer for”.’

The strange and unsettling presence of Lizzie Borden infiltrating the mind of a modern author is a suitably psychological origin to Schmidt’s retelling of the Borden tragedy.

Whereas the first person insight into the mind of Lizzie Borden in this text is reminiscent of Angela Carter’s short story The Fall River Axe Murders, in which Carter reimagines the few seconds before the axe falls for the first time, Schmidt achieves something different with her novel. Like The Fall River Axe Murders, See What I Have Done offers psychological insight into the experiences of a key member of the Borden household. However, Schmidt extends this examination beyond the much-scrutinized frame of Lizzie’s mind.

That Lizzie is the subject of much cultural fascination is clear. She is the subject of a riot grrrl rock musical, various small and silver screen recreations (including an upcoming film with Chloë Sevigny as Lizzie), and a series of books starring a young Lizzie as a ‘girl detective’ – all of which try to unravel the story of the woman immortalised in a skipping song as an axe-murderess.

The mystery of the woman at the centre of the case is the natural focus of fascination for those learning about the Borden story.

However, what is particularly strong about See What I Have Done is Schmidt’s representations of the women who are perhaps relegated or forgotten in the light of Lizzie’s experiences.

Bridget’s continual attempts to leave the Borden household, tense and strange as it is, are met with emotional reactions from Abby, who is desperate to not be left alone with her stepdaughters. Emma is shunned by her father in favour of her younger sister, and carries bitterness and grief over a failed engagement and being denied the Grand European Tour that Lizzie was allowed to enjoy.

The women around Lizzie suffer as she does with the restrictions of the Fall River home, the heatwave, and the nineteenth century limitations of gender and class. This wider psychological insight heightens the novel’s narrative tension and provides a richer context into the life of the younger Miss Borden.

Carter’s text expertly recreates the oppressive environment of the Borden household, and we as readers wilt under the heat, recoil from the stinking mess of Lizzie’s world. Returning to Carter’s theme of the highly claustrophobic nature of the Borden house, Schmidt said in the above interview that for a long time, the house itself was a narrator in her novel. The author stayed in the Borden’s house (which is now a Bed and Breakfast hotel) and the oppressive nature of the building is still very present in the text, informing the narrative and well evoked by Schmidt’s prose.

The tension, however, is familiar as well as environmental, and as the narrative brings the reader closer and closer into the heart of the family, we see the cracks beginning to emerge in the respectable family: the explosive temper of the father, the fraught relationship between stepmother and stepdaughters, and the parasitic relationship between Lizzie and Emma, two spinster sisters desperate for independence but thoroughly codependent.

Schmidt maintains this tension throughout the book until it’s final page, where we are held in the air, above Lizzie’s head, on the final line. Like Carter’s story, we are denied the climactic moment in which the hatchet falls and Lizzie’s actions create consequences – the focus being on Lizzie and her interior life, rather than the crimes which haunted her for the rest of her days.