[This story was origianally published on November 27 on the Royal Holloway Victorian Studies blog. Read the original story at www.royalholloway.ac.uk/english/research/victorian-studies-research-updates/november-event.aspx.]
Did you know that George Eliot claimed to have one hand larger than the other? Or that William Gladstone had a missing finger? Or that, despite being one of the most famous scientists in the world, Charles Darwin wasn’t recognised by his peers at a Royal Society function? Or that a young Queen Victoria had to be coaxed into taking a much-needed bath by Lord Melbourne?
Earlier this year, Kathryn Hughes’ book, Victorians Undone: Tales of the Flesh in the Age of Decorum, hit the shelves.

To write this text, Kathryn has hunted through archives, looking for material which reveals something about nineteenth century male and female bodies; a topic which the Victorians supposedly often found, well, all too revealing. Nineteenth century prudishness is notorious, but that does not mean that Victorians were detached from their changing, fallible, and sometimes confusing or embarrassing bodies.

As Kathryn has argued in Victorians Undone, ‘Victorian bodies lived in a state of constant perturbation’.

For her talk at Royal Holloway, The Curious Case of the Missing Body in the Archive, Kathryn discussed her hunt for the answer to the question, ‘what was like to have a particular body during this particular era?’. 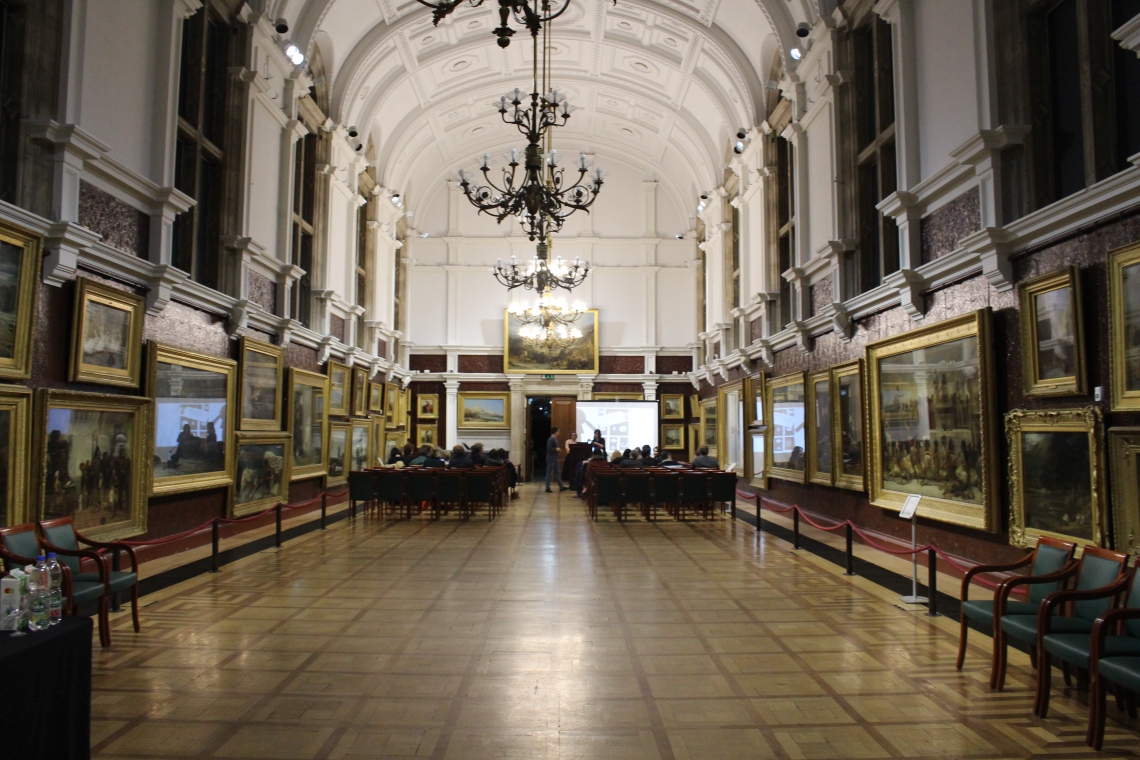 When we read a book by a nineteenth century writer, Kathryn suggested, we experience a ‘disembodied brain’ in a library. But what would it have been like to stand there while George Eliot or Mrs Beeton were editing their books? What would their gait be like, and how close would they stand to you? Were they neat, or were their clothes covered in pet hair?

As a biographer, intent on getting ‘under the skin’ of nineteenth century figures such as Mrs Beeton or George Eliot, Kathryn assimilates information about people of this era in order to ‘understand from the inside’, as Frances Spalding says here. The Victorians are chronologically near enough for us to be able to consider their bodies through methods by which we understand our own physical beings, Kathryn suggested.

However, Victorian bodies were, of course, impacted by uniquely Victorian circumstances.

William Gladstone’s missing appendage, the result of an accident while reloading a gun, was often disguised or reattached with a painterly flourish in portraits. This draws consideration of what it would feel like for a British Prime Minister having to, as Kathryn suggested, ‘organise his body around a lack’.

Branwell Brontë’s notoriously bright red hair announced what was considered to be, in the nineteenth century, a particularly suspect ethnicity. The young Queen Victoria, in a physical and moral slump before meeting her future husband Albert, comfort ate and abandoned personal hygiene, swelling in size and drawing comments about her need to bathe. This was not, as you could imagine, particularly positive self-fashioning for a Victorian woman with two bodies: one personal and one very, very public.

Kathryn’s examples lead us to the question: what does it mean to be alive in one particular body, experiencing a certain kind of time and place?

To answer this, Kathryn revisited two tales from her book, Victorians Undone.

A disembodied hand, it turns out, has been following George Eliot through legend and biography; a muscled right mitt which Kathryn said ‘just will not go away’. As a young woman, Eliot had claimed that her right hand was so much larger than her left, due to the time she had spent making butter at the Evans family’s dairy. This is a story, Kathryn said, that turns up regularly in writing about Eliot, and yet there is no concrete reference to the years spent with butter churn in hand which had made such a permanent change to the novelist’s physique.

In fact, Eliot’s family seemed horrified at the idea, and were adamant that she could not have been a dairy maid – in a 1907 edition of the East Midlands Counties Tribute, Eliot’s nephew George Evans made it very clear that she had “never made a pound of butter in her life”.
This, Kathryn said, is tied into notions of a “class” of body – the bodies of dairymaids would bear evidence to their professions, with swollen, plump fingers, and the stench of ‘heaved’ cheese. Whereas Eliot seemed to like the fact that she bore the marks of this labour, her family seemed less keen for that to be the case.

With regards to Kathryn’s search for the ‘missing’ body in the archive, however, the speaker had discovered an interesting coda to this story. George Eliot’s glove had been preserved by Cara Bray, the woman to which (it has been claimed) Eliot first made the infamous comment. ‘I hadn’t found her hand in the archive,’ said Kathryn, ‘but it was the next best thing.’

Charles Darwin, who, as indicated by his embarrassing experience at the Royal Society, did not like socialising. He also prefered the solitude of his house with his immediate family due to health flare ups, and his chronic eczema led to a significant change in his appearance – the growth of a beard, suggested by his wife as a method of easing the skin condition. Kathryn pointed out that this is notable, as it was a concept that impacted upon his work. Darwin pondered on whether beards served a similar purpose to a lion’s mane, attracting members of the opposite sex or presenting competition to other males of the species.

Unlike George Eliot’s hand, part of Darwin’s beard has manifested in the archive, collected by his daughter, who wrapped and preserved them after his death. As scientists work to unravel Darwin’s genome from these saved beard hairs, Kathryn suggests that this might lead us to finding out what Darwin’s mysterious affliction was. In this case, the archive produces the body, along with the ‘disembodied brain’ of the great scientist himself.

Through Kathryn’s research, we draw a little closer to witnessing ‘Victorian bodies’ and the people who inhabited them, and, perhaps, drawing nearing to understanding the curious case of why the body is missing from the archive.