One of the images currently being exhibited at Victorians Decoded: Art and Telegraphy, the Guildhall Art Gallery’s current exhibition, is a painting by William Lionel Wyllie.

Commerce and Sea Power, painted in 1897, shows sailing barges and steam ships engaged in commerce as the battleship HMS Illustrious is bound for fitting-out in the dockyards at Chatham Reach. Wyllie’s picture, Victorians Decoded reminds us, commemorates the close relationship between imperial trade and naval power in the Victorian period. The newly-developed telegraphic messaging systems provided vital support for the trade and military prowess Wyllie’s painting illustrates.

I grew up in Portsmouth, the city where Wyllie lived from 1906. I’ve spent a fair percentage of my life around the Spice Island point, stumbling up and down the rocky shoreline next to the jetty and exploring the cavernous Round Tower, next to Tower House, Wyllie’s Portsmouth home.

The house, located at Portsmouth Harbour, is pretty fascinating, and as a child, I’d often wonder who lived in the tall, turreted building.

Today, it’s been divided up into flats, and only as an art student I realised that maritime painter Wyllie had lived there a century ago.

Industry and the sea have pretty much formed the backdrop to my youth – Portsmouth is a maritime city with a shipbuilding heritage and a dockyard – and my father was a test engineer before he retired following an illness.

Dear old Dad had a story he’d tell my brother and I about a motorcyclist, Bert, who decided to go on a road trip to the Isle of Wight on his BSA bike. There’s trouble in paradise, of course, when the bike breaks down. Bert can’t figure out what has happened – the tyres aren’t damaged, the engine hasn’t overheated. My brother and I, having heard this engineer’s fable many times before, are patiently waiting for the big reveal of the solution – the motorcycle chain had broken! So, with human ingenuity and a willingness to get his hands dirty, Bert fixes his motorcycle and continues on his way to explore the Isle of Wight, a shadowy landmass we could see from the Portsmouth shoreline.

Engineering and the sea, therefore, are two subjects which have shaped my view of the world and how its different components interact. Narrative and storytelling is a powerful tool in interpreting these two themes and understanding how they intersect, and Victorians Decoded demonstrates a clear understanding of this.

Science communication, heritage, and the arts are interpreted in a number of creative ways in Victorians Decoded.

For instance, the endless space of the Atlantic Ocean and the miles of copper cable which ran underneath it, forging a telegraphic link between the UK and the US, is an image visited and revisited in Victorians Decoded.

150 years ago, a telegraph cable was successful laid across the Atlantic Ocean, a feat which would go on to transform trade, politics and domestic life. Telecommunications technology altered nineteenth century visions of the world, a factor which is explored in this exhibition’s investigation of how these electrical signals, and what they represented, informed Victorian art.

Distance, Transmission, Coding and Resistance are the four themes that the exhibition focuses on to explore this science-humanities intersection, and what struck me particularly about this exhibition was how creative the interpretation of these themes were.

There are some paintings – James Clarke Hook’s Word from the Missing, John Brett’s Echoes of a Far-Off Storm – explicitly reference the connection between the seemingly insurmountable Atlantic Ocean and the communication success of the telegraphic cable.

There are a number of clear links, but also several less immediate ones. I think these provide a particularly interesting way of narrativising the story of the telegraphic cable, and I’ll focus on a few here.

Edward John Poynter’s 1867 painting Israel in Egypt, for example, is revisited as a visual demonstration of the transferrance of a pulse down a cable. This technological feat is visually depicted as the burden of the captive Israelites, who drag a giant figure of the lioness Sekmet whilst being driven on with whips by Egyptian overseers.

The coding necessary to make telegraphic communication secret for commercial and political purposes is reimaged in Sir John Gilbert’s 1888 painting Ego et Rex Meus: King Henry VIII and Cardinal Wolsey. Engaged in a private conversation, the viewer attempts to decode their secretive interaction, but is unable to reach a clear conclusion due to Wolsey’s sly secrecy and the King’s shut-eyed blank expression.

Telegraphic code’s dependency on binary switching is echoed in Ariadne on Naxos, George Frederic Watts’ 1875 painting. This image depicts Ariadne grieving after her desertion by Theseus, and her servant indicating that Dionysus is coming to claim her as his bride. Set on the shoreline, this is an image in that liminal space between binary switches – land and sea, Theseus and Dionysus, the lassitude of Ariadne and the energy of her servant. 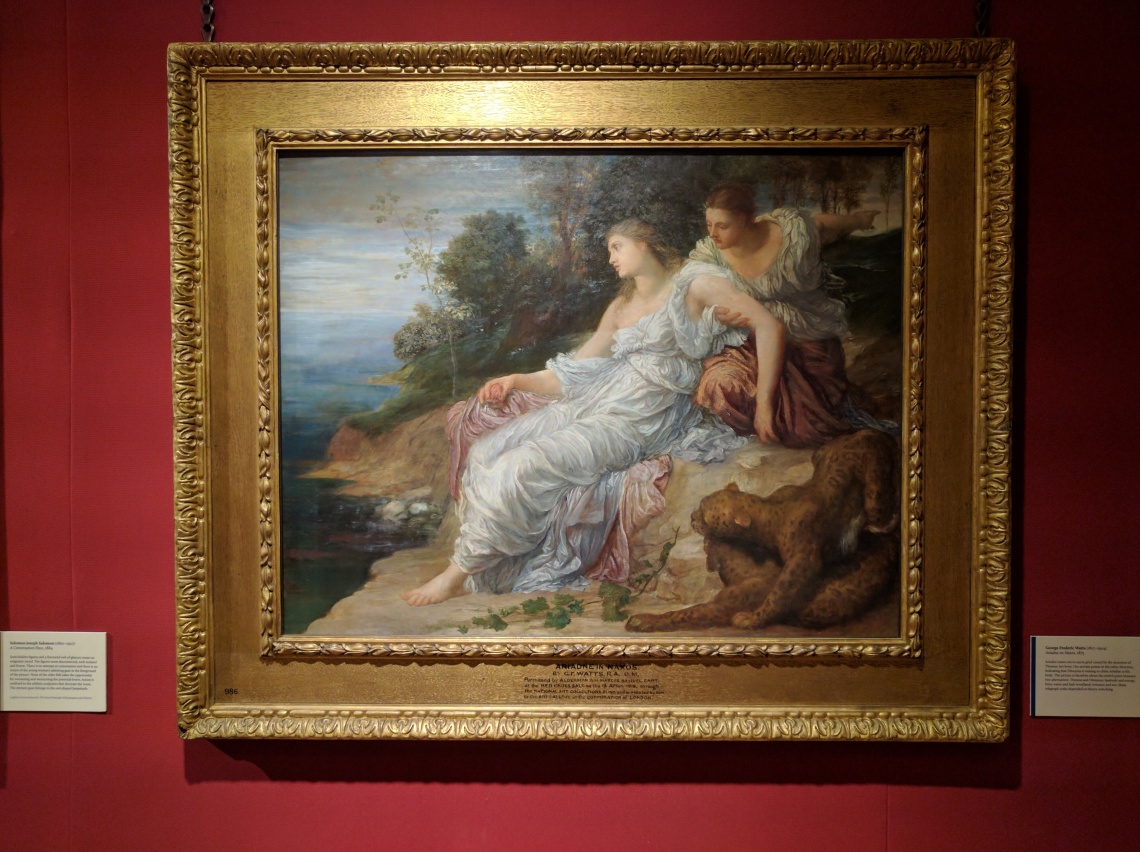 Naked figures link hands from sky to ocean in Evelyn de Morgan’s 1900 painting Moonbeams Dipping into the Sea. The artist believed that messages from the spirit world could be received on earth, a factor echoing the difficulty in transmission experienced by the engineers developing the Atlantic telegraphic cable. Achieving clear signals was a difficult task, as too much electric power caused the messages to scramble and insulation to fail. Too little, and the signals were not detectable. 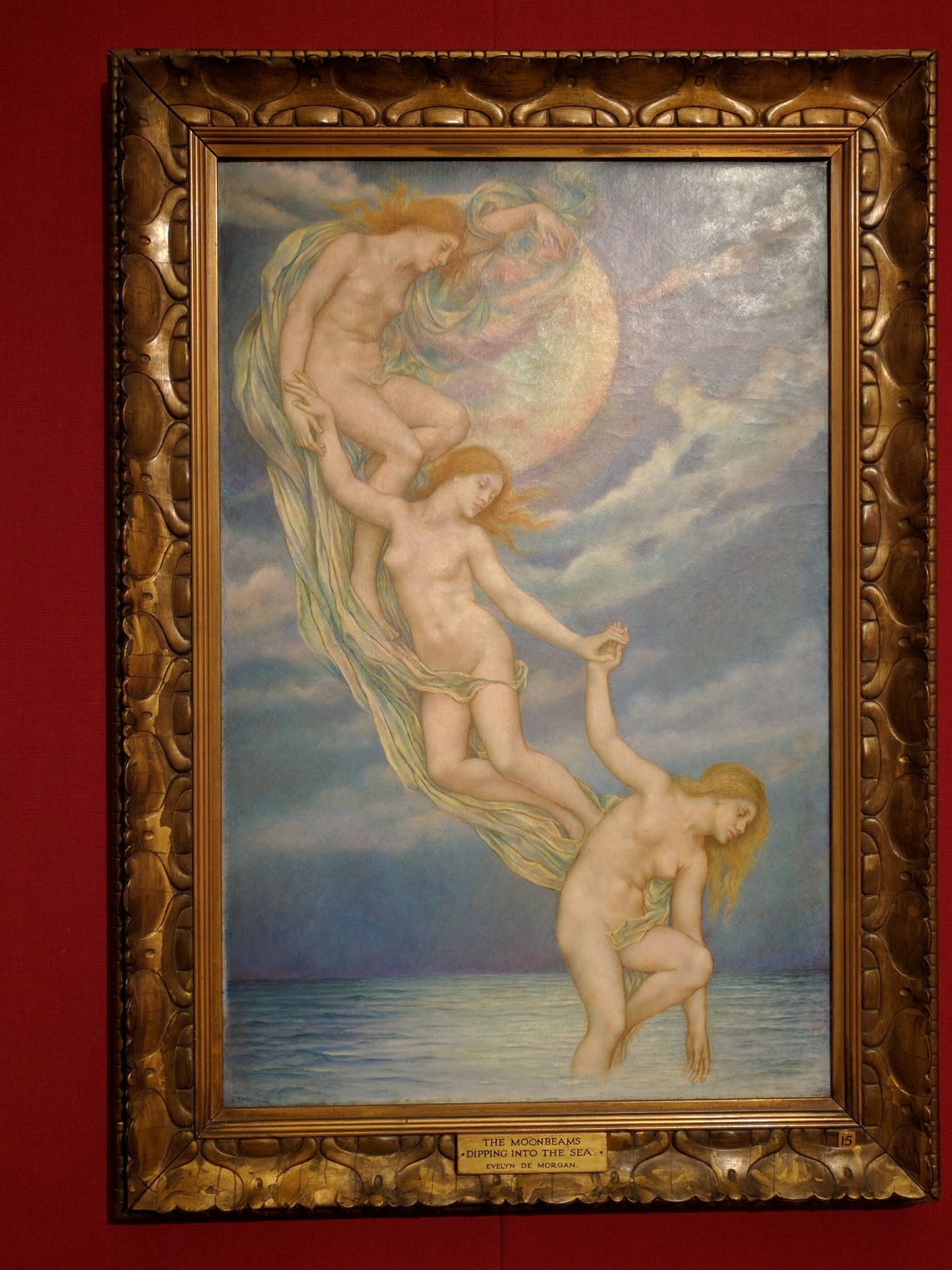 As an historian of medicine, the inclusion of Frank William Warwick Topham’s 1989 painting Rescued from the Plague was particularly interesting. This image depicts parents, confined to a house marked with the sign of the plague, lowering their last remaining child into waiting arms. This story was told by Samuel Pepys’s 1665 diary. It evokes ideas of transmission – both interrupting the transmission of disease by stripping the child of infected clothing, and ensuring the transmission of the family line through the survival of the child.

Aside from the art, there are some wonderful bits of technology on show. The first thing you see when you enter the exhibition space is a battery of Daniell Cells, circa 1840-1860. These type of cells provided the source of electricity which created telegraph messages through sending a pulse down the cable. A far cry from the Duracell of today, these cells consisted of an unglazed earthenware container filled with sulphuric acid and a zinc electrode immersed in copper sulphate solution in a copper pot.

Also on display is a prototype Wheatstone bridge, which allowed engineers to measure an unknown resistance by balancing it against three known ones. For such a temperamental-looking piece of technology, this method is apparently very accurate and still taught in classrooms today. A resistance box, used for experiments and to test new equipment by recreating the resistance properties of a real telegraph line, was also on display.

There was also some seriously Steampunk looking devices on show, including an automatic ‘Jacquard’ telegraph transmitter, made 1858-1867, which was inspired by the Jacquard loom, the first programmable machine, which read punch cards to weave complex patterns in cloth.

Victorians Decoded also included cryptographs and a cipher post, as well as a Wheatstone concertina and prototype telegraph transmitter. If you think this looks like a musical instrument, you’d be right – creator Charles Wheatstone began his career as an apprentice to a musical instrument maker. He experimented with the transmission of sound and, later, electricity, leading to his interest in telegraphy, and this prototype owes much of its design to the concertina. 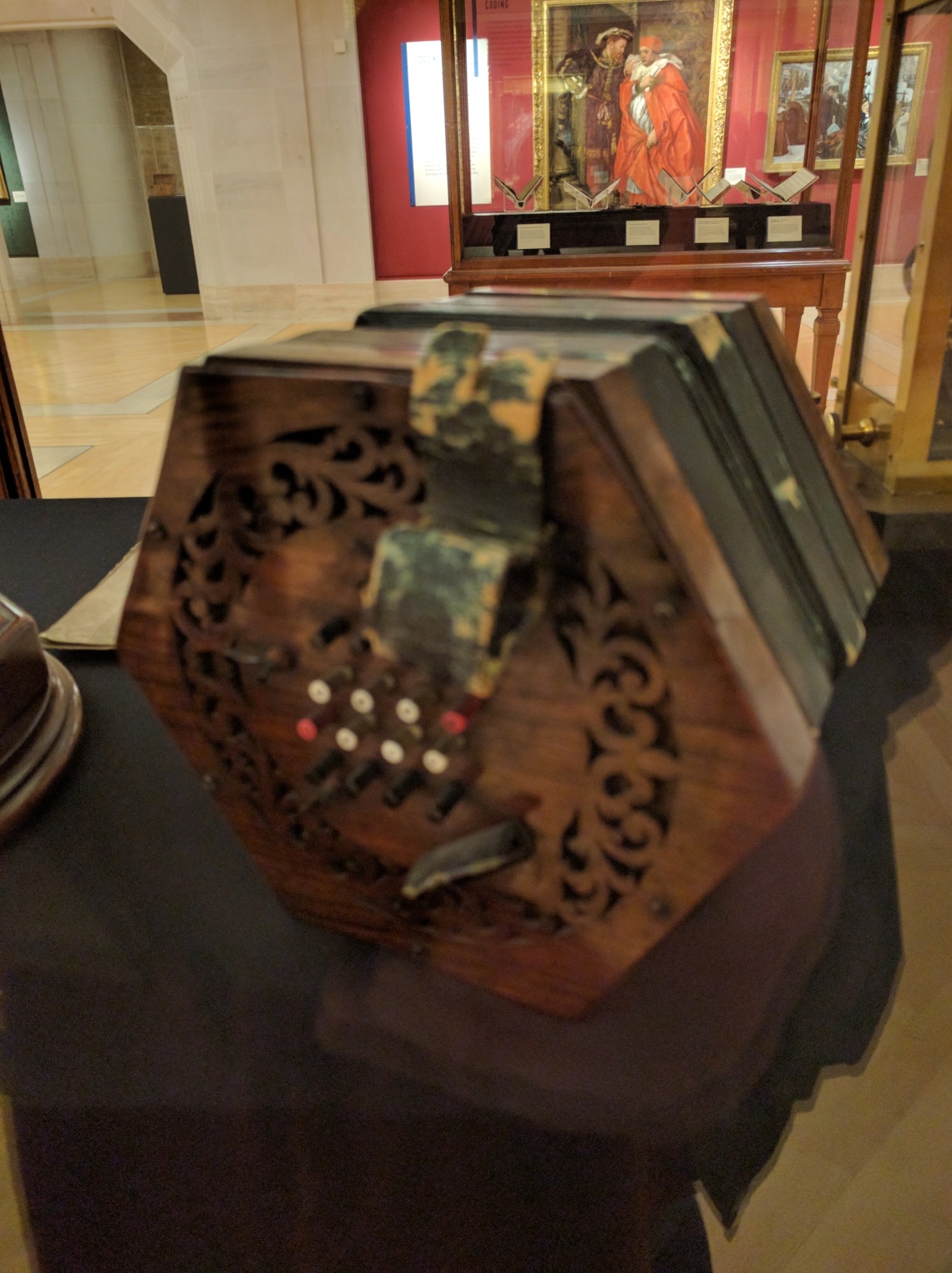 Huge technological advances, and the global impact they have on a rapidly changing modern world, are immense subjects, and it can be difficult to grasp their full impact.

We come to understand the effects that ‘putting a girdle ‘round the earth’ had on the nineteenth century world by narrativising the events, telling stories through heritage and art and journalism. Victorians Decoded demonstrates an understanding of this, and creates an engaging retelling of the laying of the telegraphic cable, allowing for the sheer scale of the accomplishment to be recognised.

Victorians Decoded: Art and Telegraphy will run at the Guildhall Art Gallery until January 22, 2017. It is hosted by the Scrambled Message project – find out more here: http://www.scrambledmessages.ac.uk/.